GETTING BACK TO NATURE… TAHOE-STYLE

When you stay with East West Hospitality in North Lake Tahoe, nature is truly just outside your door. From exquisite, sapphire-hued Lake Tahoe, to the delightful, quaint lakes nearby, to the many rivers, creeks and waterfalls, Tahoe invites you to come play in all of her waters. You’ll also be struck by the lush forests of pine, cedar and aspen trees, spring and summertime’s cheerful wildflowers as well as the variety of animals who are native to this area.

Let us give you a brief tour of what’s what in Lake Tahoe/Truckee so that you can explore and enjoy our magnificent mountain setting.

A must-see on every traveler’s itinerary is a visit to Lake Tahoe. This utterly breathtaking alpine lake is located along the states of California and Nevada, with two-thirds in California. It is fed by 63 streams and two hot springs.

The Truckee River is Lake Tahoe’s only outlet and flows from the dam in Tahoe City east through Reno and eventually drains into Pyramid Lake in the Nevada desert. From there, it evaporates into the atmosphere.

Facts:
Lake Tahoe is the largest alpine lake in North America and the second deepest lake in the U.S. (Crater Lake in Oregon, at 1,932 feet, is deeper). It is the tenth deepest in the world. If Lake Tahoe was emptied, it would submerge California under 14.5” of water. There is enough water in Tahoe to supply everyone in the United States with 50 gallons of water per day for five years.

How Cold is Lake Tahoe?
It’s cold enough that any given day of the year – even the hottest days of summer – its crisp waters can take your breath away, but technically: Below 900 feet, lake water ranges between 41° F and 39° F. during July and August, surface temperatures can reach 68° F. Along the shoreline, shallow enclosed areas can warm even further. In the coldest months, the lake surface temperature drops as low as 39° F, but usually hovers near 41° F.  Lake Tahoe does not freeze. Lake Tahoe is too massive and too deep to freeze, nor are the normal climatic conditions cold enough to cause freezing.  Sources: Tahoe Environmental Research Center, U.S. Geological Survey, National Park Service, League to Save Lake Tahoe, “Tahoe Place Names”.

You may be lucky enough to see a bear while in Tahoe. Ironically, its coloring may be brown or “cinnamon” and yet this is a Black Bear.

The Black Bear is approximately 4 – 7 feet from nose to tail, and 2 – 3 feet high at the withers. It has small eyes, rounded ears, a long snout, a large body, a short tail, and shaggy hair.

Unfortunately, Black Bears have become habituated to human food and garbage. While the chances of being injured or attacked are extremely low, meeting a bear is more likely because they are not very fearful of humans. Feeding bears is illegal (the fine is $1,000 or 6 months in jail) and increases the potential for property damage and the death of a bear! 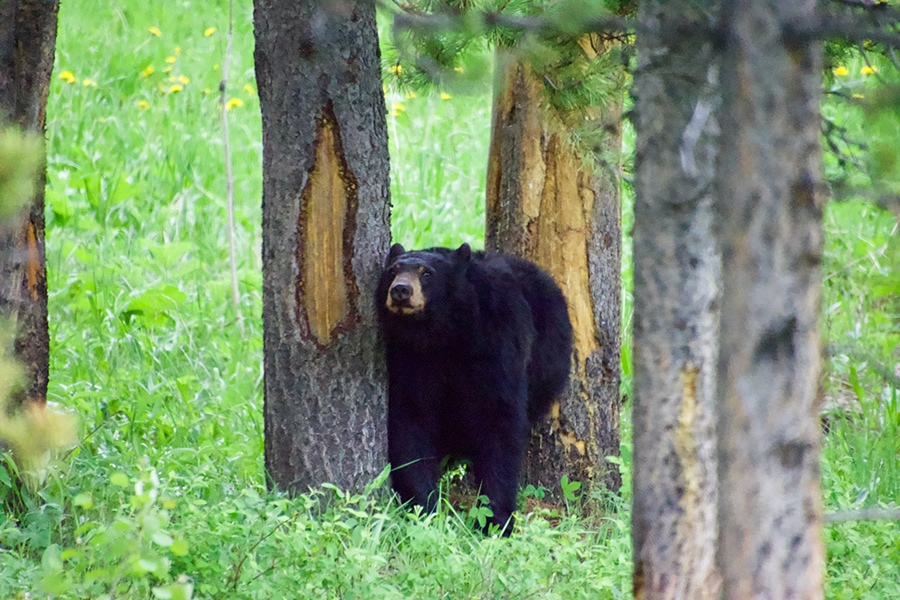 How to protect bears and yourself

• Never feed bears.
• Never leave food outside, including pet food, or in your car. Bears and other animals will return in an attempt to get another easy meal, even after you’ve gone.
• Only store food in a cabinet or refrigerator inside your home.
• Dispose of your trash in metal bear proof containers. Don’t overflow or leave garbage stacked outside of a waste container. Wooden garbage shelters are not bear proof.

What to do if you encounter a bear

• Don’t run! This may stimulate his instinct to chase.
• Let the bear know you are there and make eye contact, but don’t stare.
• Pick up small children and keep them calm, slowly back off and allow the bear to pass.
• Don’t be afraid or submissive. Yell at him, bang pots and pans or throw rocks if the bear is close.
• Make the bear think you are a bigger bear than he is.

For additional information, contact the BEAR League at 530.525 PAWS.

One of the joys of being in the Sierra Nevada is co-existing with the spectacular animals who call Tahoe home. From birds to squirrels, raccoons to coyotes, deer to bear, wildlife is all around us. Check out the following guide of Tahoe’s most common creatures:

Yellow-Bellied Marmot
The Marmot, aka “woodchuck” or “groundhog”, is the largest of the ground squirrel. Its upper back is yellowish-brown, it has a buff-colored underbelly and suns itself on rocks in summertime.

Douglas Squirrel or Chickaree
One of several species of tree squirrels found in Tahoe, the chickaree is talkative, eats pinecones and has a dark-brown back and a bushy dark tail with silvery hair tips.

Mule Deer
This species of deer gets its name from unusually large ears that resemble mule ears. The Mule Deer is closely related to the White Tailed Deer which is not found in California.

Raccoon
Raccoons are common in California. They are medium sized animals 12 to 35+ lbs. and 20-40 inches long, including a bushy tail with 7-12 rings.

Coyotes
Coyotes look like small dogs. They have pointed ears, slender muzzle, and a bushy tail. Most coyotes are brownish grey in color with a light gray to cream-colored belly. You can hear their eerie howl at night.

Jeffrey Pine
This 3-needled pine is the most common tree in the Lake Tahoe Basin. Its bark is distinctive because of strong resins which give the bark a vanilla or pineapple odor.

Sugar Pine
The Sugar Pine is the tallest, largest and most magnificent of all the pines. This 5-needled pine is easily recognized at a distance by the long, pendulous cones that hang down from the tips of the higher branches. These cones are terrific for holiday decorating.

Incense Cedar
This aromatic tree is often confused with a redwood tree because of its thick, shaggy red bark and large size. Its wood is used for making lead pencils.

Lodgepole Pine
The Lodgepole Pine has a very smooth, straight trunk. Indians used these trees as poles for their teepees while early settlers used them for railroad ties, mine timbers and house logs; today they are sometimes used as telephone poles.

Quaking Aspen
The name references the quaking or trembling of the leaves that occurs in even a slight breeze due to the flattened petioles. It is a tall tree, usually 20- 25 meters (66 to 82 feet) at maturity, with a trunk 20-80 cm diameter. The leaves on these trees turn a gorgeous yellow color in autumn.

Buttercup
The first plant to flower in wet, mountain meadows. The waxy, yellow blossoms consist of five petals about ½ inches across, and grow in low mats.

Indian Paint Brush
The burnt-orange Indian Paint Brush has long, lance-shaped leaves with distinctly wavy margins, as well as a covering of hairs. Stems are lightly branched, generally between 1 and 2 feet tall.

Lupine
The many species of Lupine are difficult to tell apart, but the group is easily recognized by the palmate leaf (leaflets originating from a common point, like the fingers of a hand). The flowers are usually blue and found in dry, sandy areas but some species are found in wet meadows.

Red Columbine
Handsome red and yellow flowers hang at ends of branches above this bushy plant with several stems and many divided leaves. Flowers are about 5cm wide with 5 sepals, red and yellow sugar scoop shaped petals extending into spurs.